The Teenage Mutant Ninja Turtles started as a comic then cartoon then toys along with the cartoon and finally the movies. The idea came from popular things during the 1980s.

Ninja (which also applies to the Footclan) = Daredevil, Elektra, and the Hand

Don't forget to order the first exclusive comic from Good Old Comics. It is TMNT 101 limted to 500 with COA by Alan Quah. You will find it on the site. It has Splinter and all of the turtles on the cover, riding the pop culture history with the first female Ninja Turtle. 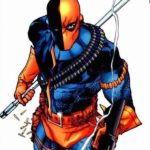 Is it true they are killing off a turtle in one of the next comics?